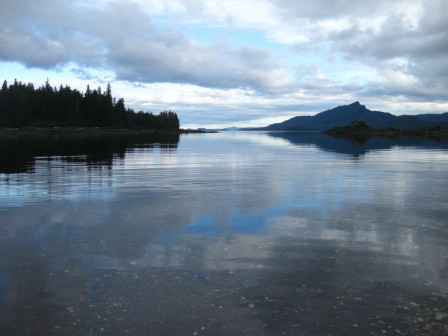 [pix_dropcap]O[/pix_dropcap]ne night in July as we pulled into a little cove on Admiralty Island we noticed a small camp on the shore of our intended anchorage. There was plenty of speculation on the bridge-deck as to who the group might have been. One thought was that they were kayakers hauled out for the night, another thought was that they were locals out camping. The speculation ended when we were hailed on the radio by a familiar voice. It was Kevin, a Forest Service employee who we’d met several years ago when he was a Wilderness Ranger who patrolled Tracy Arm/Fords Terror wilderness area by kayak. He’d seen the David B cruise past a peek-a-boo opening in the cove.  As he talked with Jeffrey, we learned that the group on shore were all volunteers who had come to Admiralty Island as part of a program of invasive weed eradication. The weed was hemp nettle, a European plant most likely brought to Admiralty decades ago where a cannery was once in operation. We also learned that Harry, our US Forest Service permit administrator, was also on shore, which was exciting because in all the years of running the David B in Alaska, we’d never actually met face-to-face.

We anchored in the unnamed cove which separates Good Island from Admiralty Island. We decided that our evening activity was going to be kayaking and that I’d take our guests for paddle around the cove, while Jeffrey would skiff ashore, chat with the rangers and offer some cookies to the volunteer weed-pullers.

The paddle was pleasant. There were ravens somewhere out-of-sight, but their deep”kwark-kwark” calls were unmistakable. We looked for sea-stars in the shallows and watched salmon jump. A couple of seals followed us at a respectable distance. When we returned, Jeffrey was already back at the David B. He had arranged for Kevin and Harry to come to the boat the next morning to talk about their work, the Wilderness Act of 1964, the Tongass National Forest, and Admiralty National Monument.

The morning broke unusually sunny for Southeast Alaska, and the rangers arrived shortly after breakfast. Kevin began the discussion by talking about the Wilderness Act, pointing out that we were celebrating its 50th year.  He recited from it. It’s some of the most beautiful language in any piece of legislature anywhere:

A wilderness, in contrast with those areas where man and his own works dominate the landscape, is hereby recognized as an area where the earth and its community of life are untrammeled by man, where man himself is a visitor who does not remain.

The words were penned by Howard Zahniser, an activist with the Wilderness Society, and after Kevin read those words we chatted about the beauty of the phrase “untrammeled by man,” Certainly the scene around us fit that description. The forest was thick with tall spruce and hemlock trees, and a deer cautiously walked on the shore of Good Island, while an eagle soared overhead and another perched high atop a spruce. We talked a long time that morning, maybe longer than we intended, but our guests were genuinely interested in the wilderness and had many questions.

Time past quickly as we continued our discussion about the nuts and bolts of the old act signed into law fifty years ago. Kevin was talking about how the Act affects us all, when suddenly my eye caught something shimmery — a huge school of salmon. I couldn’t help myself but shout out, “look, look!”  Alaska never fails to outdo itself. We all stopped to watch school swim close by the David B. The salmon were on their way to spawn and continue the cycle of life. There was nothing more to be said. Mother Nature just had the last word.