Sealions – The Grizzly of the Sea

Southeast Alaska is home to the Steller’s sea lion and these amazing animals are one of the most common marine mammals that we get to see aboard the David B. There are several haulouts in our cruising area and it’s a real experience to get to watch, hear, and smell a crowded haulout. One interesting tidbit about these sea lions is that their skulls are virtually indistinguishable from the skulls of grizzly, or coastal brown bears, as they are known in southeast Alaska. We once had a deckhand who liked to describe Steller’s sea lions as a grizzly stuffed into a tube.

Where is the David B?

Sarah here,
Often when I take a phone call or answer an email, I get the question, “Where is the David B today?”

Usually I have to guess based on our sample itineraries, but now I don’t have to!

Jeffrey recently installed a Garmin GPS unit, which updates the David B’s location and often shows the many places along the way during a trip. You can see the David B’s current location here: https://share.garmin.com/TheDavidB

I really like this screen shot of trip #297 (see the trip recap below) which shows the David B heading Northwest out of Petersburg, going around Admiralty island to visit the Baranof Warm Springs, with side trips to see Ford’s Terror and the Sawyer glacier before arriving in Juneau. 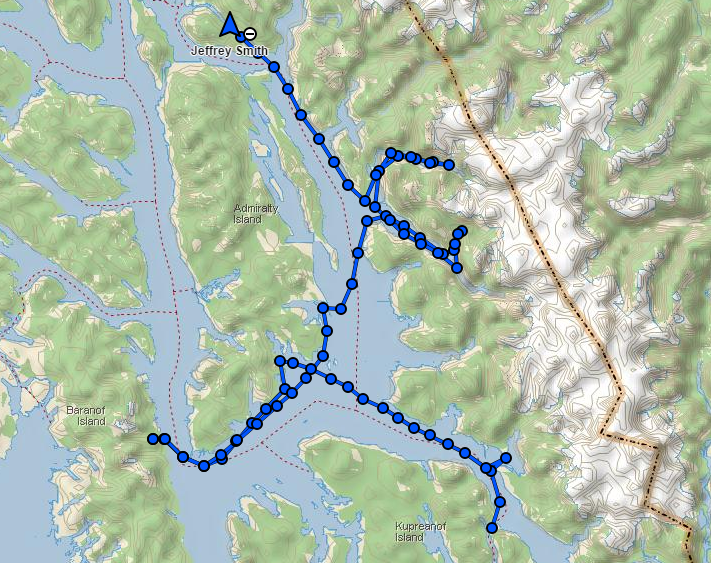 Here is another Trip Recap of Alaska. This time it’s our Northbound cruise out of Petersburg arriving 8 days later in Juneau.

Day 1)  10 June – Thomas Bay – We left Petersburg and stopped to see the local sea lions hauled out on a buoy. The sea lions were very expressive as they tried to jockey for space on the buoy.  Anchored in Thomas Bay. Skiffed around Ruth Island and tucked into a narrow cut to look at an overfall coming out of an unnamed lagoon. We saw a Bald Eagle and a small weasel, one person thought it was a fisher another thought it was a mink. It was too far away to tell. 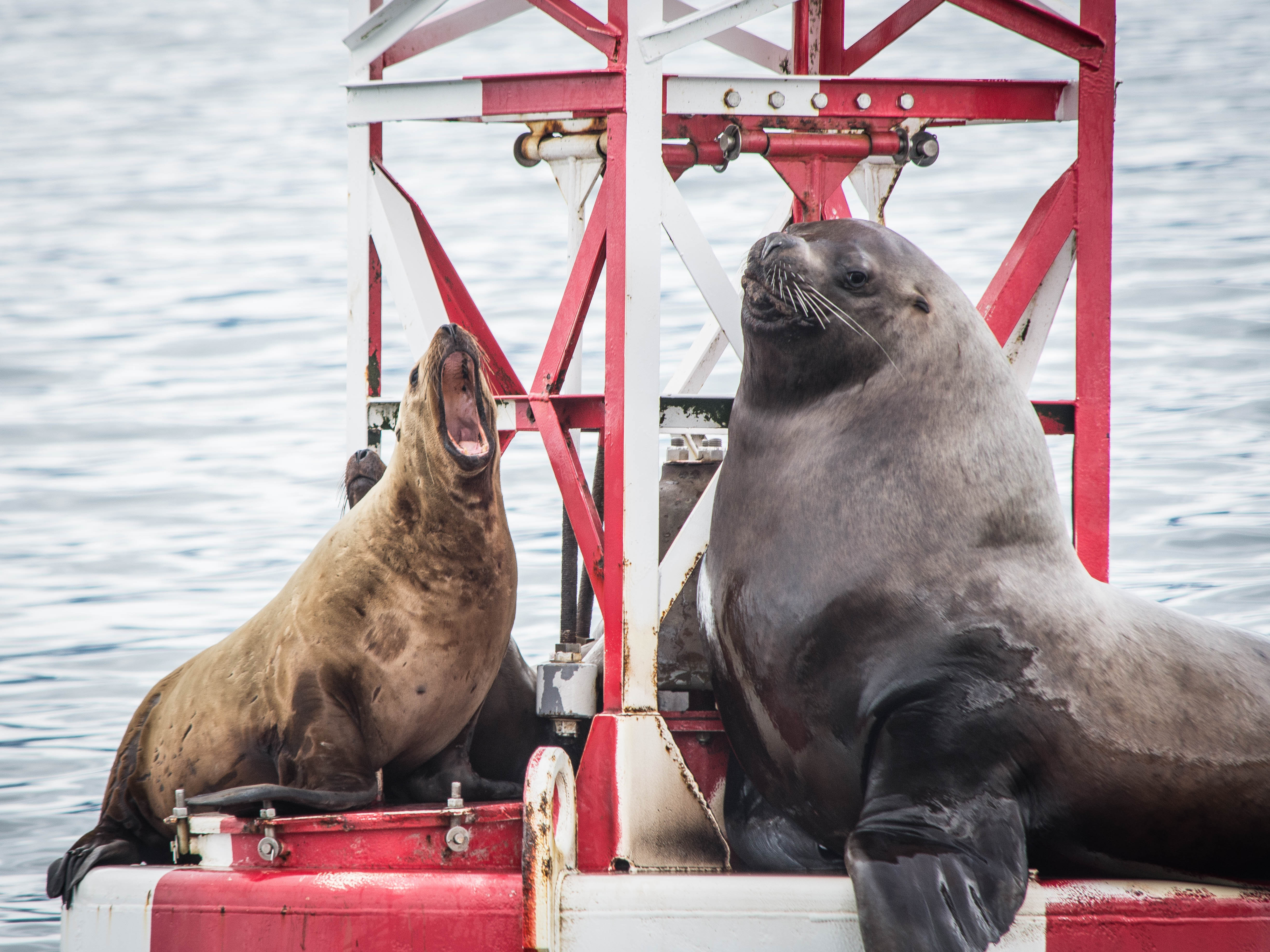 “Why is she always yelling at me?”
Day 2) 11 June – We anchored in Cannery Cove on Admiralty Island. Spotted a Brown Bear on the beach, set crab traps. Watched humpback whales as we transited from Thomas Bay to Cannery Cove. We also stopped at the brothers to look at a Stellars’ sea lion haulout

Day 3) 12 June – Watched more humpback whales on our way to Baranof Island’s Warm Springs Bay. Everyone went ashore and soaked in the hot springs. Christine was excited to have Rufous Hummingbirds come to the feeder.

Day 4) 13 June – Left Warm Springs Bay and after being underway for a little more than an hour, we found a pod of six killer whales. We hung out with them for about an hour before continuing on to Gambier Bay on Admiralty Island.

Day 5) 14 June –  In the morning we timed a shore excursion for a low tide walk to do a little tide pooling and then to duck into the forest to see what plants were in bloom. We found Calypso Orchids, Tiny white Shy Maiden, and the unusual ground cone to name a few.

On our way to Holkham Bay, we were visited by several Dall’s Porpoises who rode the bow of the boat. We also got to stop and watch several humpback whales feeding in the middle of Stephens Passage. In the evening we anchored in Fords Terror.

Day 6) 15 June – Everyone got up early to catch the right tide for skiffing into the back of Fords Terror. It’s a beautiful steep-sided fjord that is only accessible through a narrow cut at slack water when the current running slows. After breakfast we went ashore to look at several icebergs that had come off of Dawes Glacier. The icebergs had floated into Fords Terror and grounded on a sandbar. There was one of the most beautiful icebergs we’ve ever seen sitting on the beach. Christine would have spent all day with if she could. 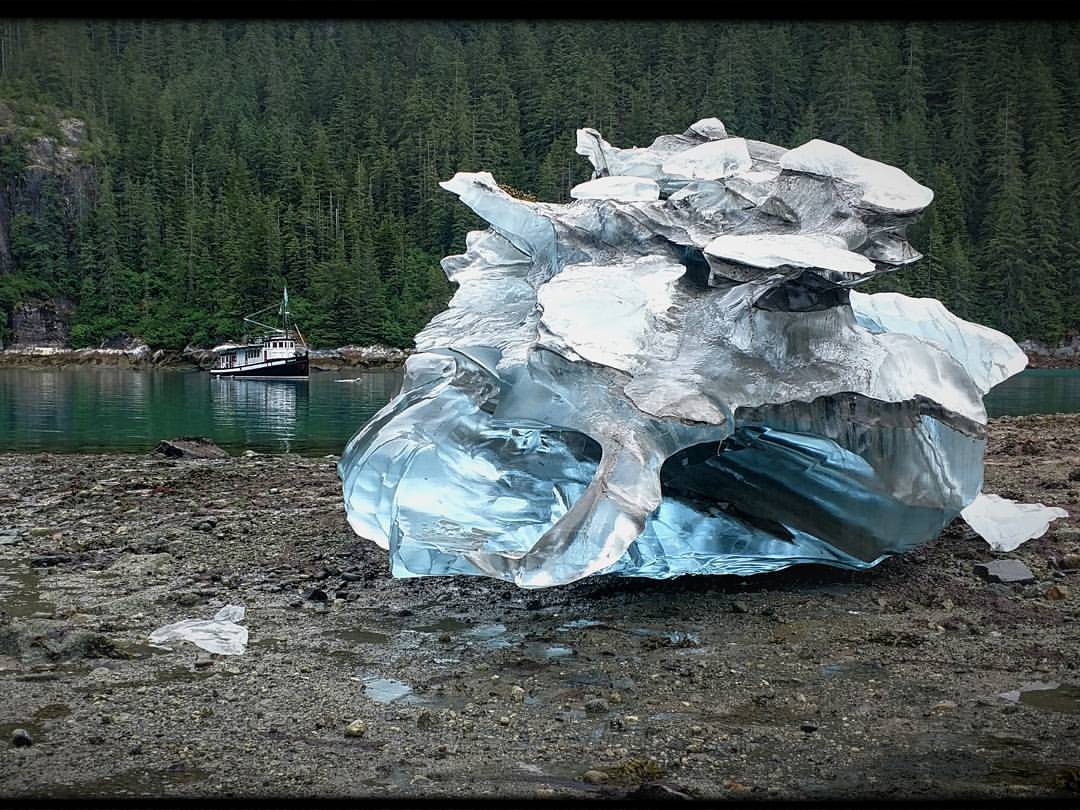 The David B anchored near a gorgeous beached glacier at Ford’s Terror.
Day 7) 16 June – Left Fords Terror for Tracy Arm and Sawyer Glacier. We got the glacier around 6pm and had the whole glacier to ourselves. Later that evening we anchored at Tracy Arm. 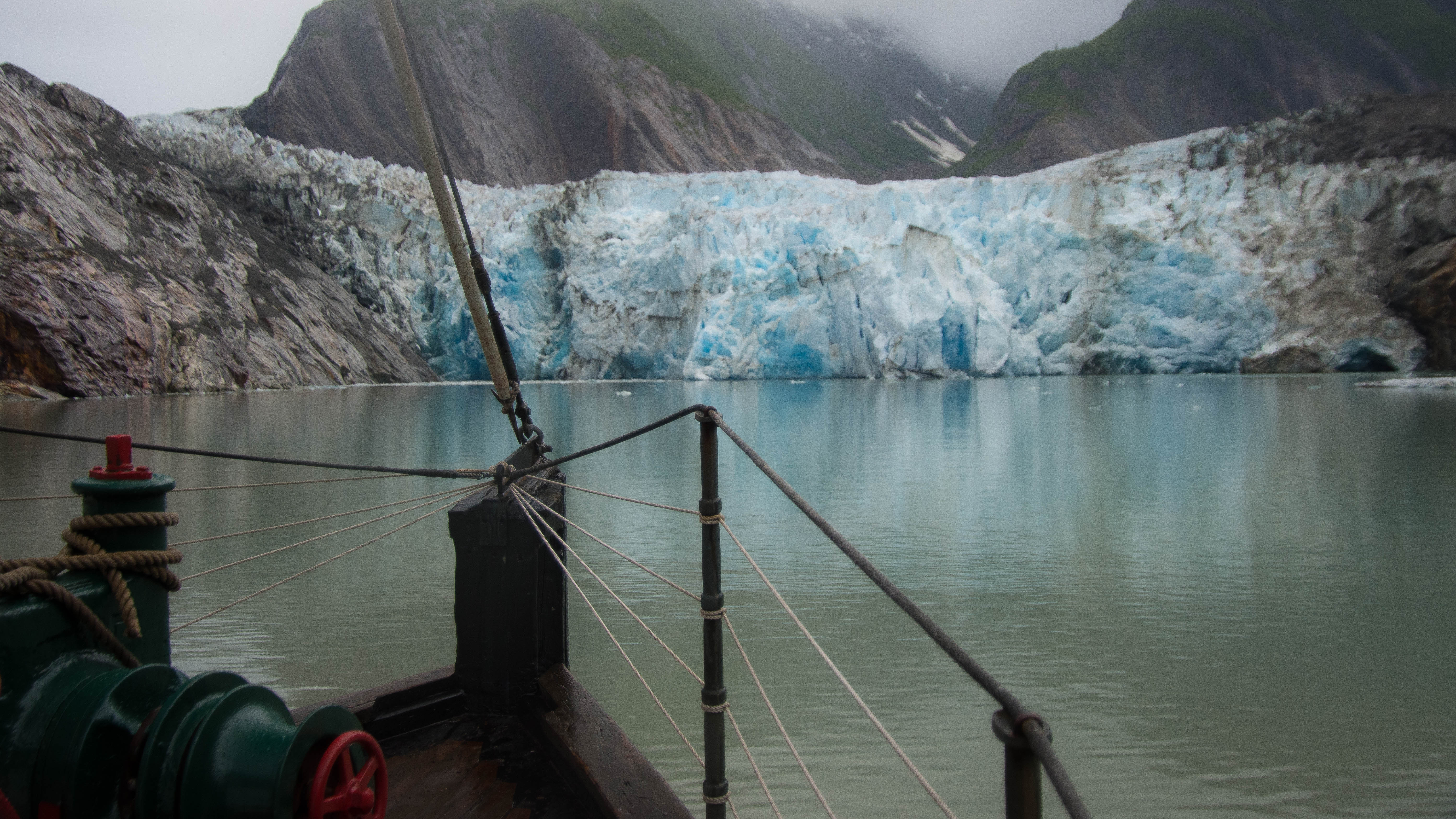 Day 8) 17 June – Left early in the morning for Juneau. Had a lovely trip with some of the nicest folks!

If Alaska is too much for you, we still have plenty of spots available for our San Juan Island 4-day and 3-day escapes once the David B returns from Alaska in August. Just look at our Schedule and then email Sarah@northwestnavigation.com to reserve your spot today!