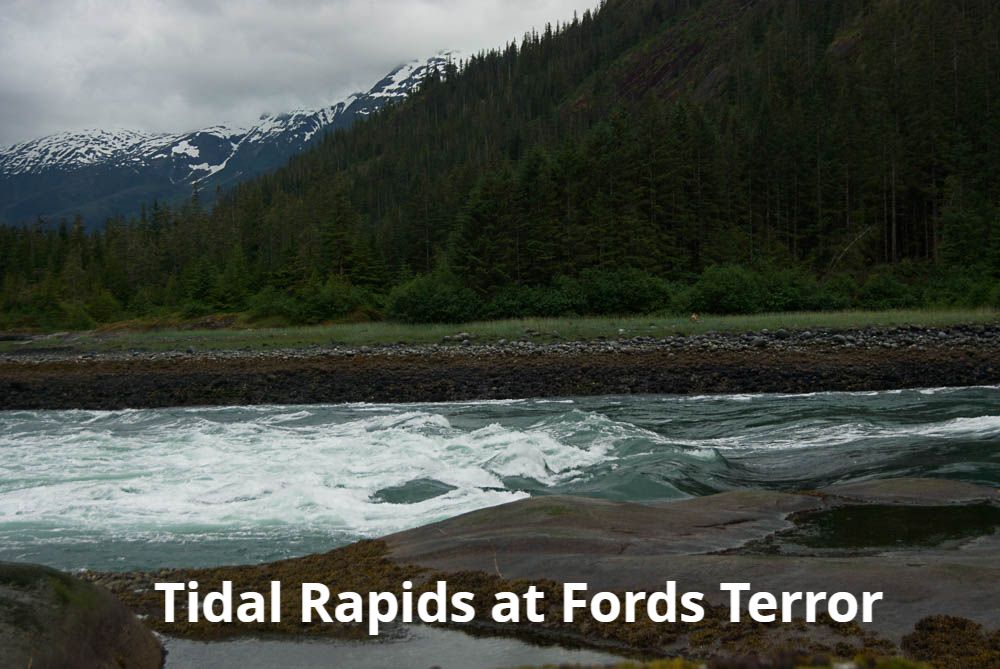 On our voyages we often run big tidal rapids. Yeah, in the big boat, not just in the skiff. And you’re saying “is that safe?” Of course it is.

If you’re wondering what tidal rapids are, here’s the explanation: As the tide rises and falls along the coast, the water is forced into all the bays and inlets and generally, the wider the inlet, the calmer the flow. Narrow entrances, on the other hand, make for much more dynamic (that means “scary”) flow, especially if there is a large area beyond the narrows that tidal water has to fill and drain. Add to that, higher tides mean more water is shoved through the constriction. On the West Coast where we operate, we have the perfect combination of big tides and lots of narrow passages. Most of them have huge whirlpools and boils and some of them run 12-14 knots or more (that’s 16 mph!)

So back to the “is that safe?” question. The reason it’s safe is because we go through at  “slack water”. “Slack” is the moment that the current stops flowing one direction, and turns and flows the other, usually about every 6 hours, and it’s super predictable. We look up the time in a published current table, do our planning to show up just a little early, and motor right through. All in calm water.

I know, I kind of let you down, because you were probably expecting great stories of surfing the David B through a huge 14kt tidal bore. But that’s actually it. If we show up at the right time nothing happens. In the beginning of running the David B, we used to tell the guests all about how strong the current could be, and show them pictures of boats getting sucked sideways as they tried to transit during the peak of the flood, and then we’d get there at slack water and… nothing. It was a let down for more than one guest on more than one occasion. We’re now careful to tell everyone what the peak flood is like, but that we’ll be going through at slack

Right now, I feel like we’re headed for the tidal rapids. If we all do the right thing and do our planning right, nothing will happen.

All in calm water.

PS – Don’t forget you can contact us at any time for reservations, information, or recipes. Our current schedule through 2022 is up. Our phone number is 360-474-7218 or shoot Sarah an email.

The Comfort of Cheesy Grits

christine
No comments
Categories: From the Galley, Recipes

I’ve been thinking about comfort foods a lot lately. I have also had several requests for recipes. One request I got was for one of my favorite recipes – Grits Gruyere. I usually make this dish on the last day of each trip to accompany the croissants and pain au chocolat that I happily spoil my guests with.

I’m a born and raised Pacific Northwest girl. I don’t think anyone in my family had ever eaten grits. That all changed one day when Jeffrey and I went to Lake Charles, Louisiana to visit one of our favorite passengers, Stacy.

It was there that I discovered Cheesy Grits. With my first bite, my taste buds lit up with joy and thoughts came rushing in. “How on earth have I not ever had this? Why are cheesy grits not in every restaurant? How come I’m them not making every trip?”

When we returned home, I began looking for recipes. Stacy sent me several. From there, I began 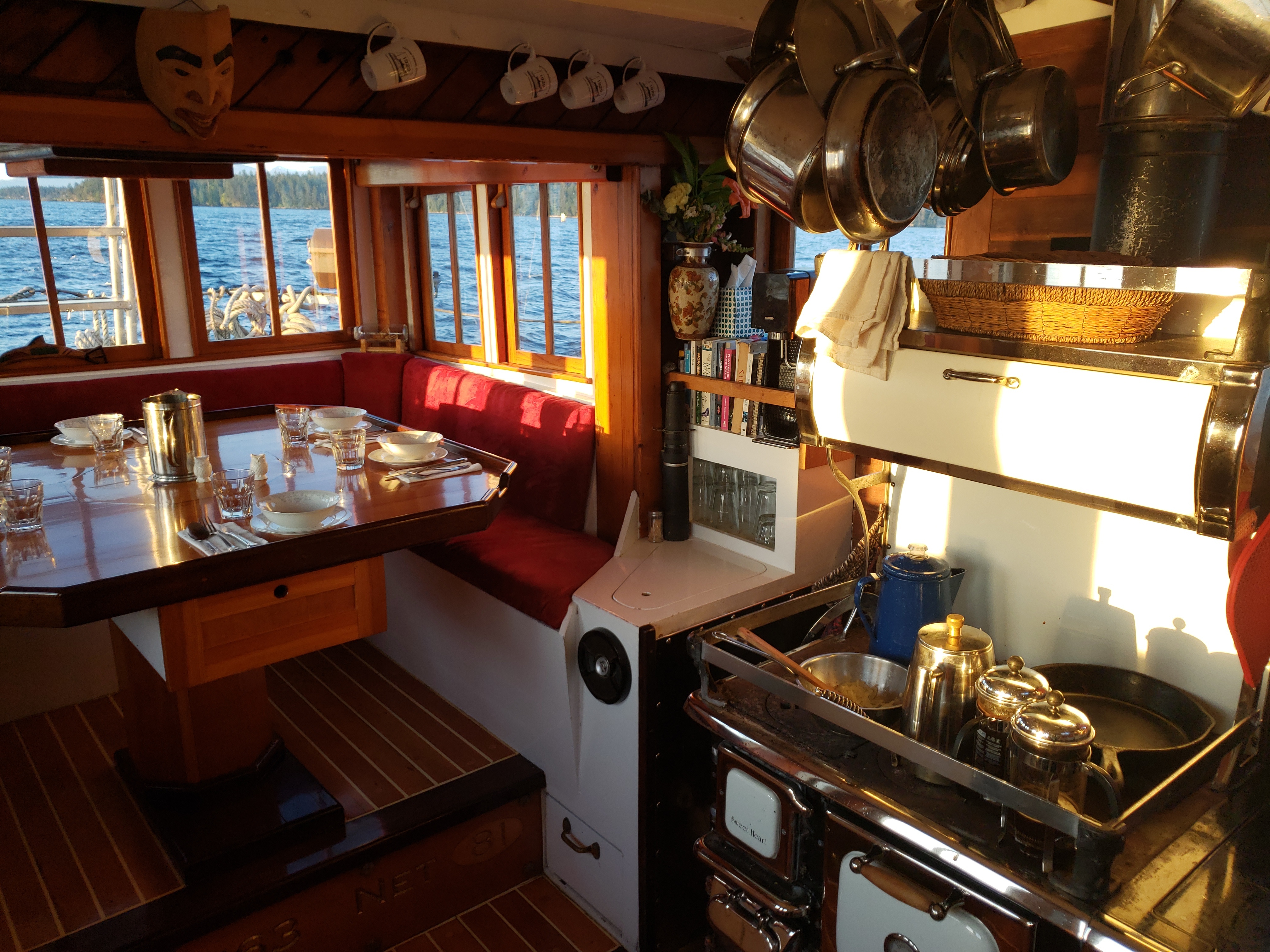 experimenting with different ingredients. I discovered that I could add shrimp, or sausage, bacon or caramelized onions. Grits were the medium and they could be modified to fit my creativity. I experimented with different cheeses – cheddars of different varieties, gouda, feta, and finally gruyere. While gruyere is not a traditional cheese for cheesy grits, it is my favorite and I don’t mind bending the rules a little.

Since that visit to Lake Charles, I have made Cheesy Grits on the boat every week. They are simple and in that simplicity there is comfort.

Take a few minutes to escape into John D’onofrio’s beautiful photography set to haunting flute music. He put together this short meditation to inspire those of us who dream of great landscapes in distant lands. John is one of our photography instructors and this slideshow video is from several years of trips with us in Glacier Bay National Park.

In the Heart of the Storm

I thought about this story the other day and about its parallels with our current situation:

A little story about a Wild Wind Storm

We have a little saying about the weather forecasts along the border that the Canadians always seem to predict too much wind and the Americans are always late. Sadly it doesn’t fit into a nice rhyme like “red skies at night… “ but if the American forecast is for windy by lunch, you better be ready by breakfast.

We were on our way through the San Juan Islands on our way to Victoria, Canada on a September trip a few years ago. Our guests were a family that has done multiple trips with us over the years. We anchored at Orcas Island for the night, then planned to go on to Victoria the next day. The forecast: drizzle and calm overnight, then clearing and windy the following late afternoon.

“Perfect,” I thought. “We’d be into Vic by noon and tied up before it blows.”

We got up early. Still drizzle and low clouds and still the same forecast from both countries. We weighed anchor and headed west, still in the calm. I started to wonder if the forecasts were going to be wrong. The Canadians had predicted a gale for the afternoon, but everything was still glassy. The Americans had said “late afternoon.” Then it began to clear and that’s when the wind came up.

It was behind us at a steady 30 with higher gusts and building. The white caps were getting blown off the tops of the waves. I remember thinking how I always love the look of the sea on brilliantly blue really windy days like this, even as it gets more and more uncomfortable.

Victoria wasn’t looking like such a good idea. If San Juan Channel already had this much wind, the Straits of Juan de Fuca where it’s much more open and exposed would be way worse. We tucked into Roche Harbor. As we turned into the harbor we came face to face with the wind, now easily well over 40 with higher gusts. We tried to anchor, but with the gusty winds, we couldn’t get the anchor to set. We finally had better luck in an out of the way shallow corner of the harbor. It was easily blowing 50 and it wasn’t even 10:00.

Then the fun began. As we sat safely anchored, we listened to the VHF radio while call after call was made to the Coast Guard for help. A barge broke loose from its towboat, a dock came loose from its pilings complete with all the boats tied to it and washed ashore, windsurfers were unaccounted for, and more, so much so that the Coast Guard radio operator even sounded at one point like he might break down and cry. It was pretty-much continuous mayhem until dinnertime, but like most fall weather in the San Juans, it only lasted that day, and the next morning we left on a bright, sunny, calm ride to Victoria.

We were tied up by noon.

christine
No comments
Categories: Books, David B and the Terrible Rocks, Uncategorized

Looking for something fun to do? It doesn’t matter if you’re a kiddo or a kiddo at heart, we all love to color and learn. Click on the images below and a new window will open with a full-sized downloadable coloring page based on the kid’s book, David B and the Terrible Rocks. We’d love to see what you or your favorite little one does. Feel free to take a picture and send it to us by email. Also let us know if you would like us to show off your artwork in our newsletter, or on our Facebook, Instagram, and Twitter pages.

Buy a copy of David B and the Terrible Rocks…

Color in the David B and explore your feelings and emotions.
Click here or on the image above and download your own copy.

Get to know Dolly Porpoise and learn about some of the things that make her special.
Click here or on the image above to download your own copy.

Sometimes we will be sitting in an open area watching whales when one will surface and swim towards us. There are so many beautiful sounds: the whales’s breath, the sound of water cascading off its body, and the laughter and joy from our passengers.

Taken on one of Marine Ecology of Southeast Alaska trips.

Ice calved from a glacier is the essence of ephemeral. As you move around an iceberg, it changes in color, it glows, its shape reveals other shapes. You see birds taking off, or flames frozen, then without warning, it capsizes and you realize that moment has gone and something new is in its place.

Taken in 2019 on one of our Glacier Bay Photography Workshops in Alaska.

This pretty place is in Glacier Bay National Park where there’s a short hike next to Lamplough Glacier. We like to visit this trail as often as possible and especially on our photography workshops where we can spend hours exploring the beauty of nature.

The new galley overhead (roof) and back deck cover is in place. We were able to install in about a week ago and since then we’ve been working on the finishing details like handrails and stanchions on the outside of the David B and new overhead tongue and grove in the galley. The next time you are on the David B you’ll really enjoy all the space on the upper deck as well as a dry outside space on the main back deck. I hope these photos can give you a good idea of what a nice upgrade this is. Not only did we upgrade the deck this year, and we also upgraded our double kayaks. They are a little shorter, wider, and more stable. We think you’ll love them as they are a lot easier to get in and out. 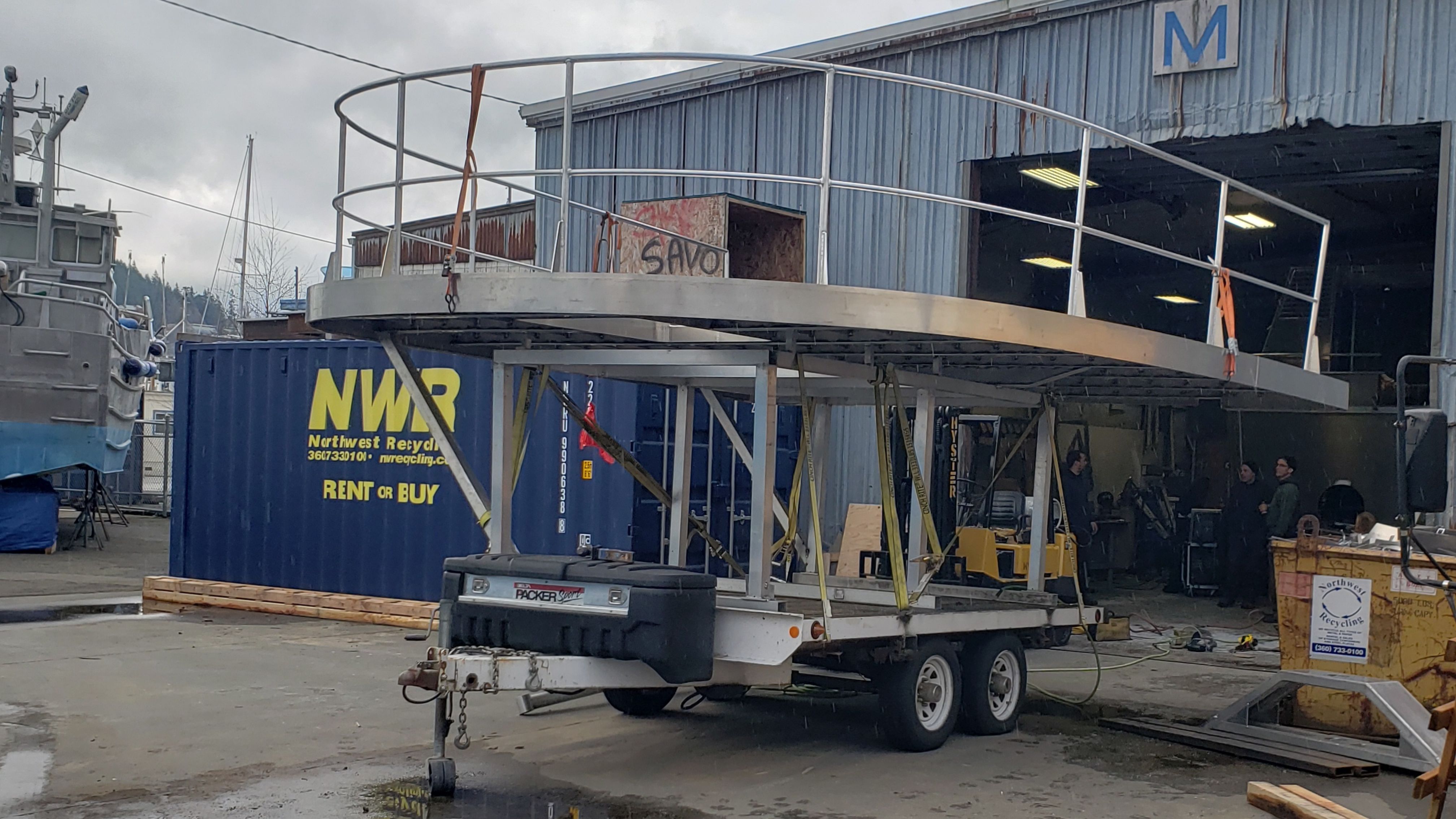 Tin Top at the fabricators and ready to move to the David B. 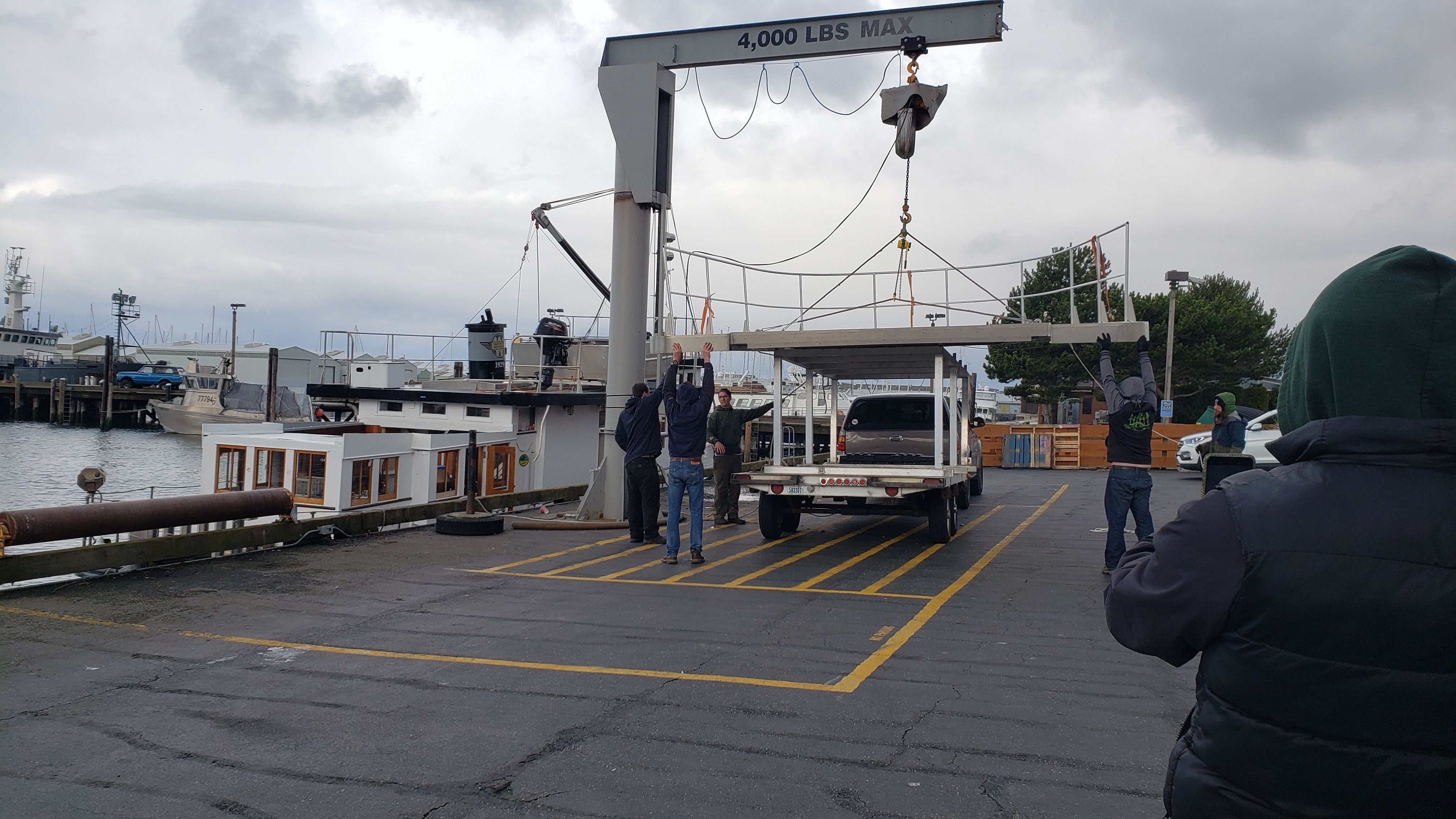 After a short drip down the road, the TIn Top is ready to be installed on the David B. 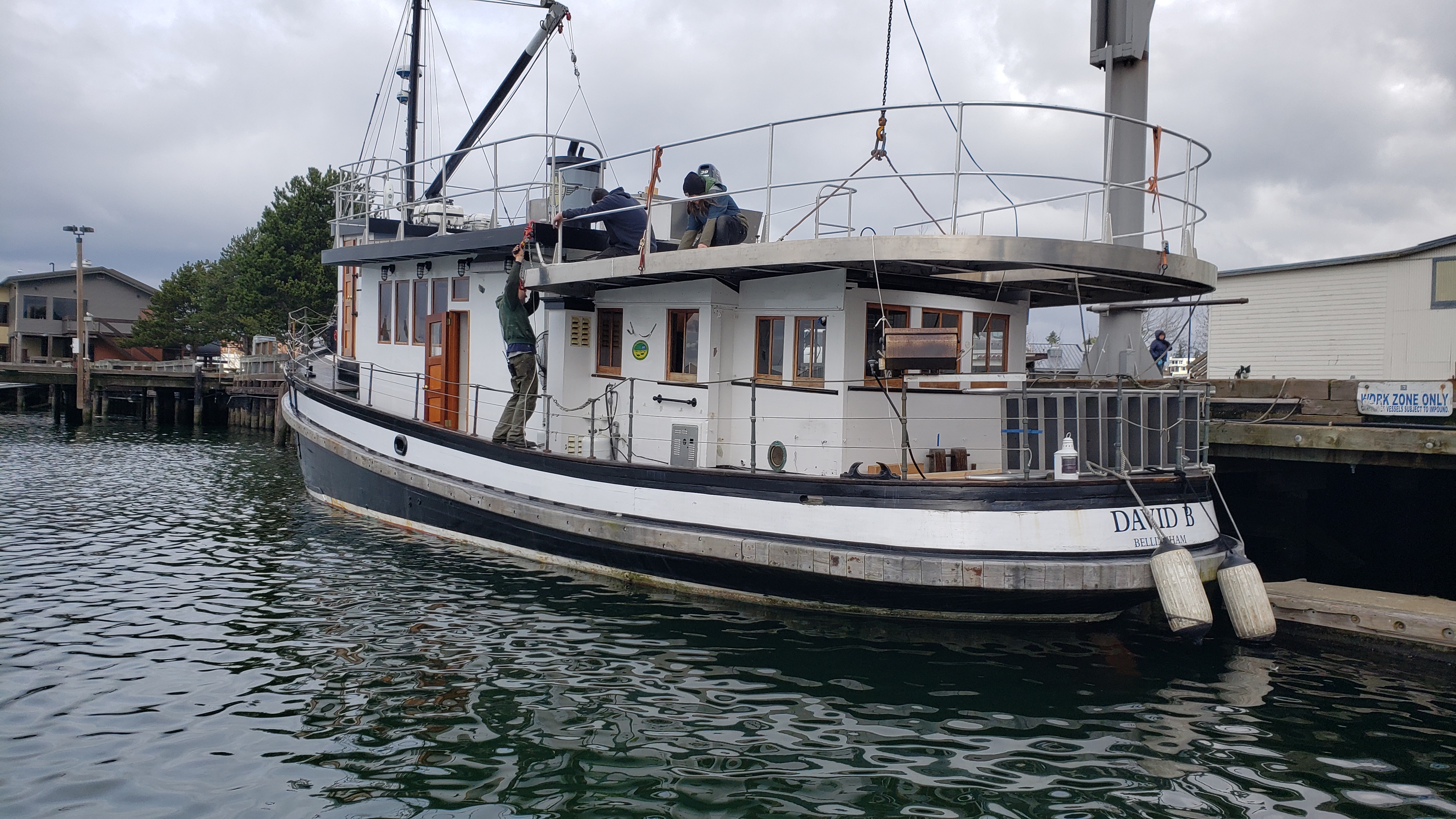 It didn’t take very long for Captain Jeffrey and the fabricators to get the Top on the David B. Next week we’ll update you will all of the work we’ve done this week to make the David B the best boat for seeing Alaska on.

While we were at anchor in Fords Terror we got to watch this female black bear who had a couple of cubs. They ate grass and barnacles and crawled over rocks. While we were anchored in this spot we also got to watch two other bears on the opposite shore.