By Jeffrey Smith, Photos by Josh McInnes and Christine Smith

On the  David B we like to do what comes along. We do have a schedule like everyone else, but a lot of times we change it to respond to the moment. We don’t want to miss anything. 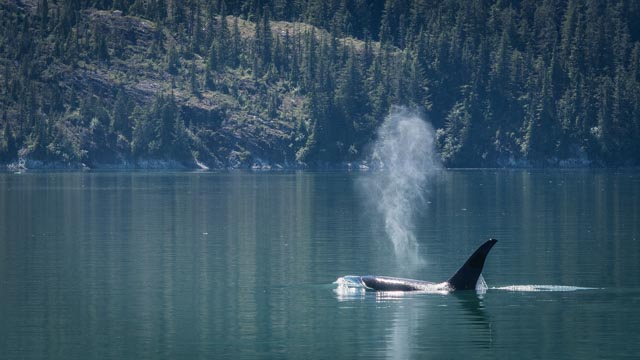 So that’s why I was a little taken aback when I tried to help out another boat that was nearby so that they would see some orcas we had just spotted. When we find wildlife, especially something as cool as transient killer whales, I typically radio other boats that are nearby to make sure they’ll get a chance to see too, (and hopefully repay the favor later). Then there’s usually a radio discussion about how we can all maneuver so as not to be in each others view.

I politely, and a little excitedly made the call. Then the whales turned around, so we moved to follow them, I called again. All of our guests were out on the deck taking photos and loving the show. Josh McInnes, our guest naturalist and whale biologist was explaining what we were watching as it happened, play by play.

I finally made another call, because I wasn’t sure if the other boat was uncertain of my intentions. They seemed to be staying a long ways away. Finally she explained what they were doing:
“We’re going to be staying away from the whales for about another 20 minutes, because our guests are still eating breakfast.”

What??? I was unable to believe. How unfortunate for those folks, because in 20 minutes the orcas might slip away. Our chef was out on deck with the whales. Our galley was unoccupied. We were with whales!

Over the next few minutes the pod slipped through a narrow passage, so we followed. Then they reversed course, and swam right past us, and caught an unsuspecting harbor seal right in front of us. It was amazing. There was even a brand new unknown calf in the group. We might have been the first humans to see it. We turned around and stayed with them for almost another 30 minutes. 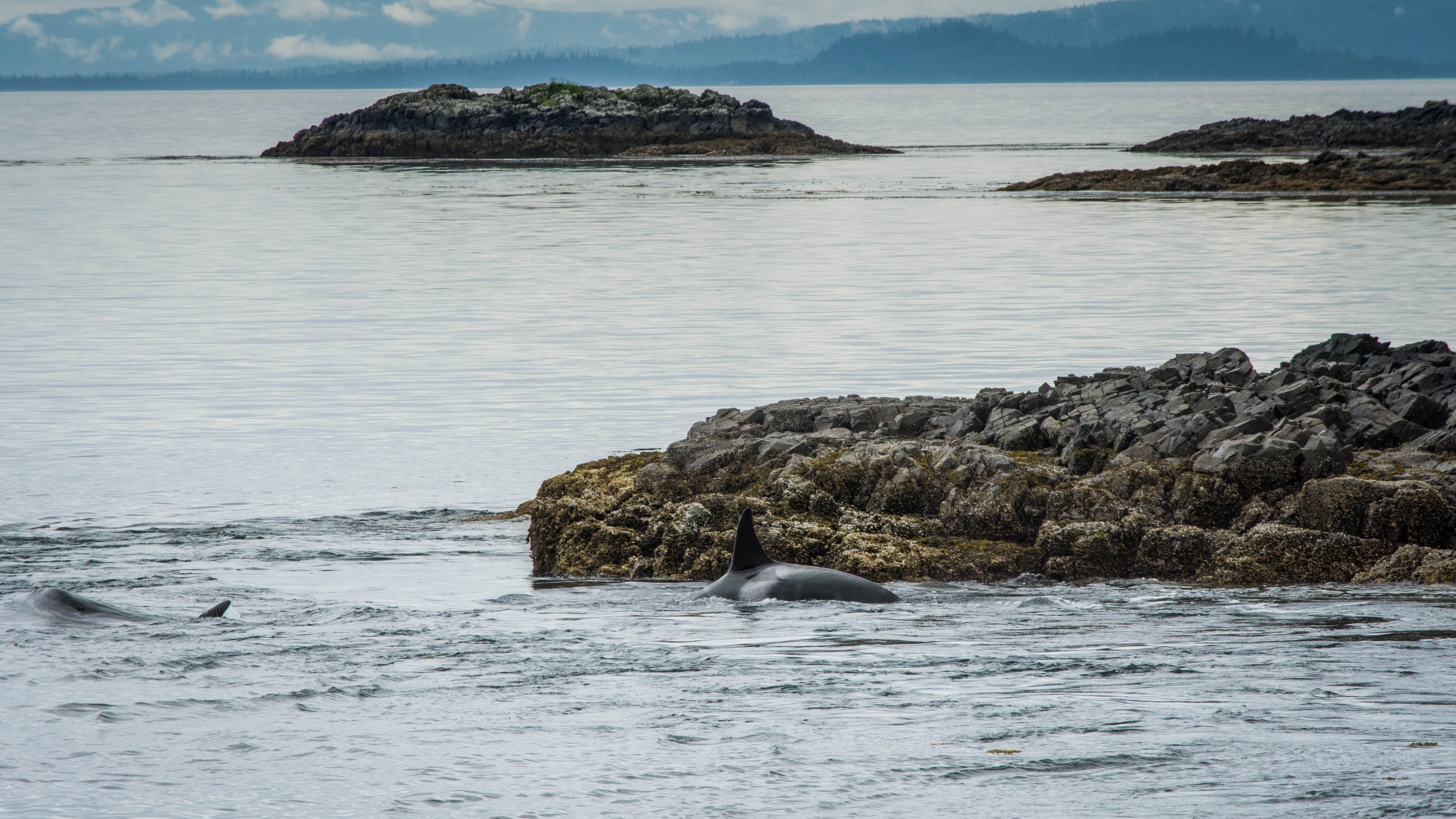 75 feet away from Killer Whales Having Breakfast

The happy ending of the story is that they did finally join us watching the whales, and got to see some amazing breaching, a behavior that the transients do after a kill and after they’re done eating. And we didn’t miss any meals on the David B either. It was good for everyone

I love our ability to be unscheduled. We go where the wildlife is when it’s there and happening. We actually saw the hunt, the capture and the kill. Food, for us, can wait. For the bigger boats, I understand, they need to be scheduled. But I really think our guests get a better trip.

Even if we are unfed. 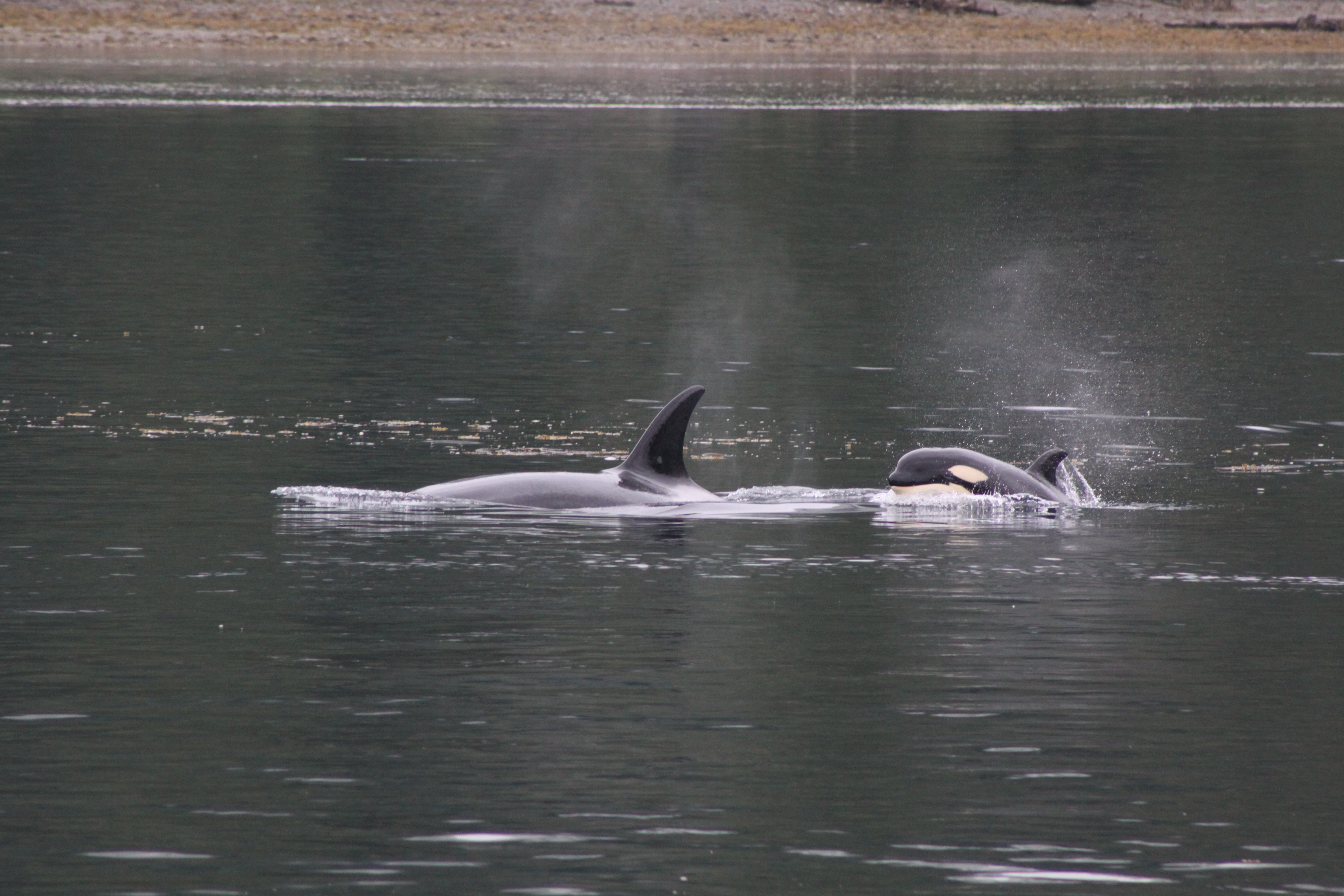 We are super excited to begin our 2017 Northwest Navigation season April 27th! We will be taking a family of seven to the San Juan Islands.

Plus next week we’re going to start sending out trip recaps so you can enjoy all our adventures as they happen!

This story was originally published at CruisingNW.com and can be read there in its entirety.

Where the skiff meets the beach the sound of hundreds, if not thousands of small-flat weathered rocks clatter and scrape against each other as if in protest of having to move out of the way. I feel the same protest from under my Xtra-Tuf boots as I hop out of the boat and onto Pelican Beach at Cypress Island. The shore, as far as I can tell, is made up entirely of skipping stones, accented by a few large weathered logs. Once again, I think, no pelicans, and to the best of my knowledge few, if any have ever visited here. Maybe someone, some day will tell me the story of how Pelican Beach got its name.

It’s always tempting to sit down on a log and mindlessly sort through rocks, or spend the day watching the changing moods of Mount Baker while boats cruise though Bellingham Channel. The reason I continue up the beach is the 1.3 mile hike to the top of Eagle Cliff. It’s a moderately strenuous hike, but the effort is rewarded with one of the best views in the San Juan Islands.

Cypress Island is unusual in the San Juan Islands. It’s heavily forested and virtually unpopulated. As the fifth largest island in this highly developed archipelago it’s remarkable that 91% of the 5500 acres of land on the island is public. Cypress Island is managed by the Washington State Department of Natural Resources (DNR) and most of the land operated as a Natural Resources Conservation Area that’s reserved for outdoor recreation like the hike to Eagle Cliff, and the rest is protected as a Natural Area Preserve.

The hike to Eagle Cliff is through a predominantly Douglas fir forest, but there are also Western red cedars, Western hemlocks, and big leaf maples. I look forward to whatever I might find in the forest. My favorite two animals on Cypress are the poisonous rough skinned newt and the banana slug. As I walk the trail…Continue Reading at CruisingNW.Com.

Tides, Currents and Rapids in the Inside Passage

Cruising in the Inside Passage should be on every boater’s Must-Do List. The rewards for making the trip to Alaska are interesting towns and villages to visit, amazing natural beauty and a wild and remote feel you can’t find elsewhere. The southern part of the Inside Passage from Seattle to Desolation Sound is chic with upscale island towns full of art galleries, small wineries and craft breweries. North of Desolation Sound the Inside Passage grows more remote and wild. It’s where you’re most likely to find solitude. All of it is over-the-top beautiful.

The Inside Passage gets its dramatic geography from advances of the massive Cordilleran ice sheet that pushed its way south, all the way to Washington State in the late Pleistocene. Evidence of this long ago glaciation is written into the Steep-walled fjords where grooves in the rocks show the slow-motion scraping rock and ice. When you begin to study the charts of the Inside Passage you’ll notice that the long winding deep inlets that cut into mainland are the beds of the long ago glaciers and you can trace their retreat to the high coastal mountains where their remnants still remain. To continue reading about how tides and currents will effect your cruising in the Inside Passage click over to CruisingNW.com…

Outfitting your boat for cruising in the Inside Passage doesn’t have to be over-the-top expensive. You do, however, need to be prepared to spend a lot of money, but if you follow some basic guidelines for decision making, you can put together the best electronics package that will fit your budget.

When we were first buying electronics for the David B, we asked ourselves the following questions for each purchase:

Click on over to CruisingNW.com for a complete list of our tips on buying electronics and why some electronics are more important than others.

This week I wrote my second installment in the Learn to Cruise series I’d doing for CruisingNW.com. We’re doing set of articles in conjunction with our 12-day Learn to Cruise educational cruises in the Inside Passage. For week two I’m giving some tips for planning an itinerary. The topics include:

You can read the whole article at http://cruisingnw.com/planning-your-inside-passage-cruise-itinerary/#

Be sure to check out our 12-day Learn to Cruise the Inside Passage trips. These are fun one-way cruises departing from either Bellingham, Washington or Ketchikan, Alaska that are great for individuals or couple who want more hands-on boating experience in the Inside Passage.

For more information or to book a reservation:

Learn to Cruise the Inside Passage

When a friend of ours suggested we change the focus of our 12-Day Inside Passage trips between Bellingham and Ketchikan from nature and wildlife watching to instruction, we knew he had a great idea. Last year we sold out our Learn to Cruise trips and we certainly hope to do so again this year.

As part of our excitement about these trips, we are happy to announce a series of articles we’ll be writing for CruisingNW.com. In these articles we’ll be sharing information on cruising the Inside Passage. We hope this will help others plan their own trips. The link below will take you our first installment. In this article you’ll learn why we feel cruising in the Inside Passage should be on everyone’s bucket list.

We hope you’ll enjoy these articles and find them useful!
http://cruisingnw.com/learning-to-cruise-introduction/

If you are interested in signing up for one of our Learn to Cruise trips you can call us at 360-201-8184 or fill out the form below: